Balkan Rivers Tour 3 has officially started… on the road and on the water!
Starting in Albania, we are heading north through Macedonia, Montenegro, Bosnia and Herzegovina, Croatia ending in Slovenia. Six countries, 32 days and 17 events including film premiers of our documentary The Undamaged, street protests, creative actions and lots of kayaking. here are some of the highlights of week one.

Paddling Albania’s mighty Vjosa River.
The first Balkan Rivers Tour (BRT) in 2016, started as just a crazy idea to show the world the last wild rivers of Europe. And the Vjosa became the star. Who knew a river so wild still existed in Europe? And who knew that it was slated to be dammed. After a long and dedicated battle by locals and international NGOs, we were able to halt the plans. So, it seemed fitting that we got on the water of the Vjosa as the first river of BRT3.
Photo: Mitija Legat

Protest in Tirana
In many of the towns, cities and villages of the Balkans, locals are afraid to stand up to decision makers. The threat of losing their job or other repercussions keeps them accepting the status quo. Through Balkan Rivers Tour we bring in energy and kayaks. We bring a loud voice with international media coverage and then we pass the microphone or loudspeaker off to the locals. We are inspired their courage and we hope that we are able to support and encourage them to make demands of their decision makers. We feed off of eachother’s energy. Olsi of the local NGO EcoAlbania is one of our favourite guys to work with!
Photo: Katja Pokorn

Protest at Skopje
As a grassroots organization, Balkan Rivers Tour has the freedom to use creativity and kayaks to get the message about dirty hydro out there. With kayaks we can access the most wild and amazing canyons of the Balkans, but we can also bring them to city to show local politicians and decision makers that there is huge potential for ecotourism in the Balkans, with more longevity and income potential than dams. Yvonne Chouinard found of Patagonia once said, “A paddle can be a very powerful tool.” And we agree.
Photo: Katja Pokorn 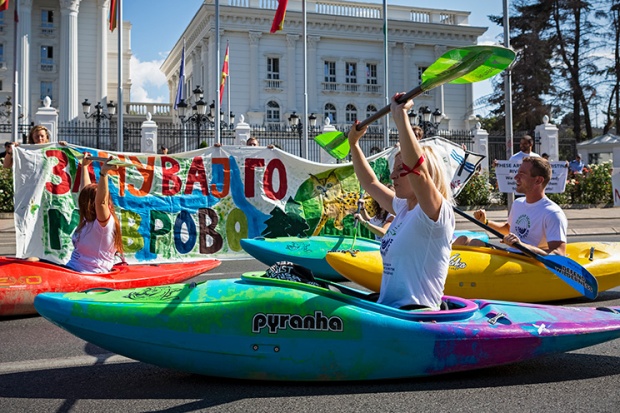