By Laurie Gullion
The roaring cascade of Mollis Falls on the Reisa River above the Arctic Circle filled the crisp air with mist and a glorious rainbow. A family with young children scampered up a narrow trail for a higher view and they danced and pirouetted in the spray created by the river’s most famous waterfall, sturdy in well-worn outdoor gear.

We had stopped our canoeing cruise along the lower Reisa River in north Norway to hike into Mollisfossen (falls), which plummets 269 metres (883 feet) over the granite rim in two stunning tiers. “Back home (in the US) they’d be stopped from climbing there by a railing and a danger sign,” I said to our group of six solo canoeists, with appreciation for the Norwegian embrace of friluftsliv, literally “free air life”.

Twelve years ago I’d watched with amusement as two young Canadian paddlers portaged a tandem canoe to the sparkling pool beneath the falls and got blasted across it by the shock waves of turbulent air and water. With higher water in July 2015 creating bigger waves, no one was trying to paddle in the pulsating basin. Just kids tumbling and laughing on the wet grass and wildflowers like offspring of the brown bears which occasionally inhabit the remote upper reaches of Reisa National Park.

Not that we had seen the resident bears and wolverines — but we did see reindeer on the open tundra high above the river as they nibbled on lichen and early vegetation. The river flows away from Finnmark, the traditional Sami homeland where reindeer herding is still practiced, and slides north toward the sea.

The frolicking families at Mollis had motored upriver in the long Norwegian guide boats used for sightseeing and fishing, since the 50-pound salmon found here lure anglers from around the world. These sleek, low-volume craft were the first canoes we had seen in three weeks of paddling the Poroeno, Kautokeino, and upper Reisa rivers. It was high season for tourists and mosquitoes, which still didn’t mean lots of people on the river. And it was great to see kids with the freedom to roam. 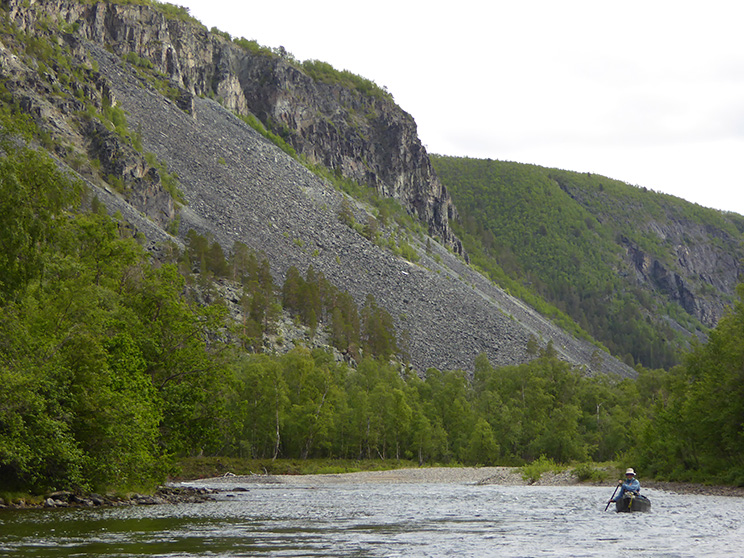 We were eating the remains of our food rations at riverside with less enthusiasm than the Norwegians, who fired up mid-day coffee, cooked sausages over a pit fire, and happily consumed smoked salmon on fresh bread. “I think I’m ready for something other than Wasa crackers and the last tins of mackerel and liver paste,” I said. The crackers’ chief virtue was an ability to survive the first three weeks of the trip.

Most who visit the national park ascending up its easily navigable rapids, but we had descended from its headwaters and portaged around Imo Falls, the official beginning of the lower canyon. The river gradually widens below Imo to flow 90 kilometres (55 miles) to Storslett, a full-service town at its mouth. Paddlers, hikers and anglers can get transported upriver for a day or multi-day trip – perfect for families who can choose camping or hut accommodations in the national park. It’s also perfect for novice paddlers.

The meandering lower Reisa was a welcome cruise after our portage around Imo Falls. We had opted for the longer hiking trail that our leader Alv Elvestad, a native who grew up on the river, believed would be easier than a narrow trail along the canyon rim that ends in a steep descent along unstable scree, complete with ladders designed mostly for hikers. Alv had termed the alternate trail “flatter,” which given his propensity for putting a positive spin on challenging situations, made us a little suspicious but ready to buy into the option.

Flatter trail? Okay, maybe, except for the hill so steep that the stern ends dragged on the trail. Beautiful? Absolutely with stunning wildflowers along a sparkling brook. I’ve come to realize there is no such thing in Norway as a flat portage trail but it certainly was safer to carry gear and canoes well away from the canyon rim. The rim trail is nondescript in places, as we discovered when we hiked back along it to sightsee and grab more gear. It’s easy to wander off since the crumbling granite outcroppings tend to look alike if you aren’t paying attention. 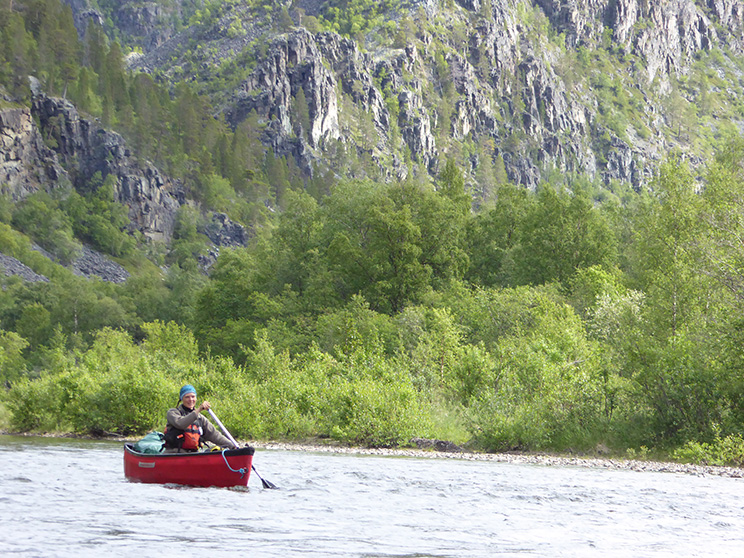 The view into the heart of Imo is well worth the side trip to the overlook, where two rivers collide in an impressive falls. Hikers can actually climb ladders down into the canyon, but high water in 2015 prevented us from descending to the rocky floor, still covered by snowmelt in July after Norway’s unusually snowy winter. In fact, our first look at the lower Reisa amazed us, since snow still clung to the mountainsides in mid-July, and brilliantly pink fireweed and yellow globeflower were just beginning to bloom. Locals said no one could remember the snow lasting so late into summer.

Once back on the river below Imo the shallow, rock-filled rapids slowed our initial descent for about 2,000 metres. Then due to high water we had to line around the rapid at Nedrefoss, where a suspension bridge for hikers crosses the river – the first real sign of civilization and the highest point where paddlers can get transported upriver. Then the Reisa canyon begins to gradually widen. We slid easily around gravel bars and fast outside bends, admired endless waterfalls and smelt the rich mix of pines and birches along the river’s edge. 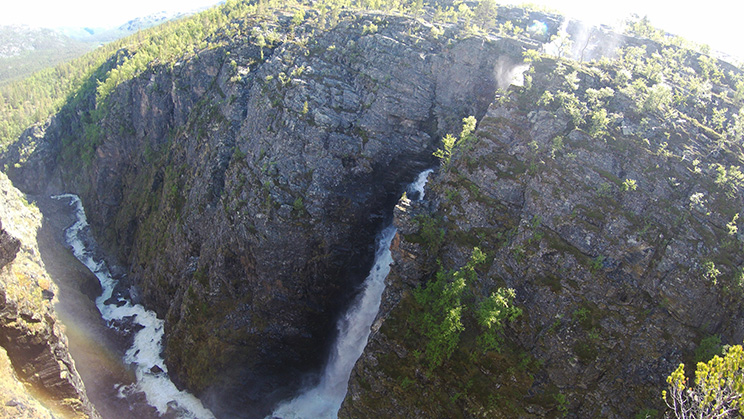 Lush green ostrich ferns on the riverbanks – the kind that produce edible fiddleheads – made me want to return for spring harvest. This fertile valley has a rich agricultural history, warmed by the Gulf stream, with tidy farms that dot the river as it approaches the sea. While the upper Reisa feels like an expedition, the lower section is a vacation.

Paddlers and hikers alike can access the upper section from Saraelv from either the canoe launch or a hiking trail that runs up the river’s west side, crossing at the Nedrefoss Bridge and continuing up the east side to Imo. For hikers and anglers it’s well worth the hour’s walk from the Nedrefoss hytta (hut) through open pine forests upriver to the falls. We treated ourselves to a stay at the gorgeous log hut available for rent from the national trekking association – bunks, wood stove, complete kitchen, upholstered benches and chairs, a separate sauna, and a lavu (teepee). It’s one of seven cabins for rent along the river. 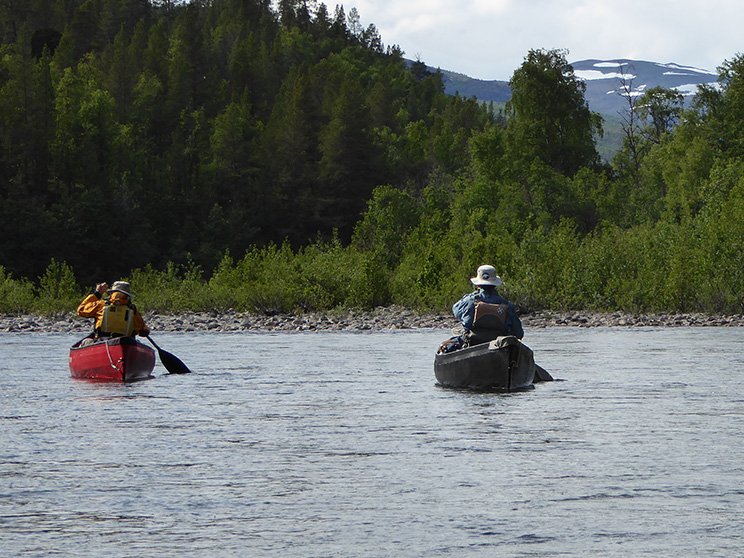 Lower on the river at Saraelv we hiked the Sarafossen trail to a high plateau that offered an impressive valley view and a waterfall that dropped 230 feet into a narrow gorge. No railings here either, and no signs that warn of danger. The Norwegians figure that you have the sense to stay away from the abyss. Near the village of Sappen we also hiked to a high plateau where later in the season we would be able to pick mountain cranberries and cloudberries, the yellow blackberry-shaped fruit treasured in the north. Best of all we watched small herds of reindeer feeding on lichen around the rocky outcroppings above the tree line.

Small, brightly-coloured farm houses and tidy fields flank broad river terraces as paddlers approach Storslett, but stark mountain ranges on both sides continue to rise sharply from the valley floor. I’ve always been amazed by the short but intense growing season here, where the 24 hours of daylight create a very different climate than the barren lands of Arctic North America. Potatoes and strawberries in these riverside gardens above the Arctic Circle and sublime canoeing in a season and place that can restore balance to one’s liv (life). 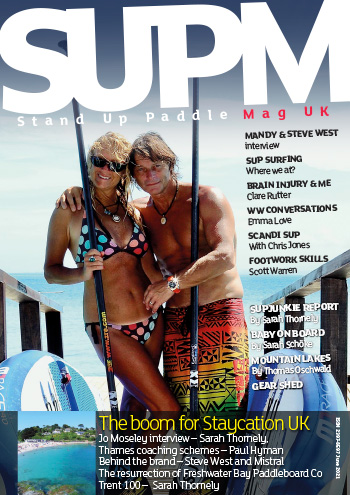