The gem cannot be polished without friction, nor man perfected without trials.
Chinese proverb

Do not ever go kayaking in China in the year of the Dragon
It will meddle with you in more ways than you can imagine. Choose a less deadly animal, perhaps the year of the Pig? Pigs are not known for their widespread destruction of humanity and possess a slightly more rational demeanour and in this part of the world are constant entities. Not ones to rear their heads occasionally instilling fear into all.

As superstitious beings, you may think a friend and I would have accounted for the Chinese zodiac calendar in the planning of a kayaking trip to the second largest drainage in China but we failed to fully consider the ramifications. Something we were made acutely aware of from the moment we arrived in rainy Qinghai province.

The plan
Sourcing in the Bayan Har Mountains on the eastern flanks of Yushu Tibetan autonomous region, the Yellow River, or Huang Ho, carves a path 3,395 miles long through nine different provinces before emptying into the Bohai Sea 200 miles south of Beijing.

Our targeted section of river begins 150 miles from the source and we planned to complete close to 100 river miles. The estimated gradient over the section was quite high, considerably higher than some of the big rivers in Sichuan province paddled previously by some of the team members. We rationalized this by predicting more continuous white water, rather than pool drop style big rapids. Satellite imagery confirmed that this would be the case and there would be very few flat sections, albeit the dam reservoir near to the take out.

We would not be the first group to attempt to navigate this puzzle of canyons and rapids. During the Chinese river exploration era of the late 1980s, a team of rafters had attempted to complete a source to sea descent of the Yellow. Inspired by events from the Yangtze expeditions in 1986, a team of seven began in the summer of 1987 only to meet ill fate, resulting in the entire team perishing in the section we planned on paddling!

Affording both a roadside put in and take out, it seems bizarre that no other group of kayakers has attempted to paddle this section in the 25 years since its first attempt. A very sobering thought, but with lower water levels, modern equipment and a few more river miles under our belts we felt confident at the prospect of tackling the Yellow.

On the road
Climbing high onto the Tibetan plateau, the altitude squeezed my lungs, demanding more and more exertion from me, whilst two 6’ 2” men squeezed me from either side like bullies in a playground. Crammed into this minivan alongside me were Travis Winn (USA), Dan Yates (GB), Sam Ellis (GB) and one incredibly brave driver.

Arriving at our intended put in, we were greeted by a bank full river going like a freight train into the unknown. Kidding ourselves that this couldn’t be our river, we were after the Yellow River not the Brown River we were forced to rapidly re-assess our situation. The Dragon was upon us.

Unusually high rainfall for the month of May had brought the river level up significantly. Many local people were as unhappy about this as we were as May/June is prime caterpillar fungus collection season. Harnessed to the roots of certain hillside shrubs one can find caterpillar fungus that looks much like a shrivelled chilly. This is extremely valuable in China for its powers of virility and many people pay not only for the fungus but to harvest certain land for it. Travis wilfully translated as people exclaimed how the high rainfall had spoiled the crop and ruined many peoples normally lucrative trade. Sharing their disappointment I couldn’t help but think in a nation of 1.3 billion, virility doesn’t seem to be too much of a problem. 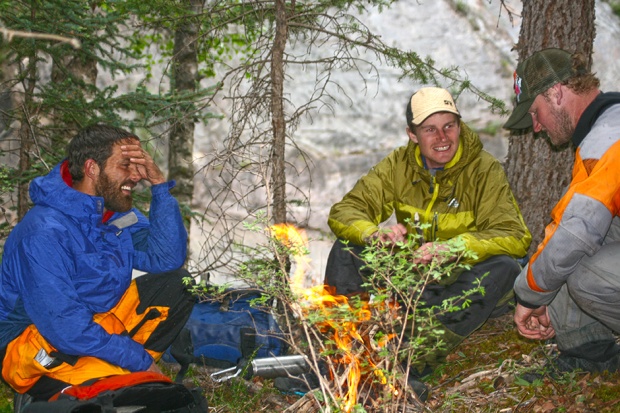 Decision time
Climbing high on a small road we were able to view a small section of the river that hadn’t been channelized through our put in town. Comforted by the sight of big eddies, beaches and rocks lining the bank we knew for certain that the river hadn’t hit flood stage yet.
Estimating the flow to be about 800 cubic metres per second, we made a group decision to put on the river and after packing boats for six days we started with some easy water. High-resolution satellite imagery had shown us exactly where we would find out biggest concentration of rapids and in fact the biggest rapids, dubbed by the team ‘Terror 1’ and ‘Terror 2’. This 21st century tool is certainly useful, however it does have the tendency to draw out the anxiety the paddler feels over a number of months and perhaps presents a different version of exploratory kayaking than the true white water pioneers of past generations.

Happy to be on the river
Dropping into big wide canyons, we paddled numerous rapids, most not too technical but big, powerful features to negotiate. Everyone was happy to be on the river after countless days of travelling by plane, train and truck. Gingerly trying to peer round each corner to find out what surprise the river had next we were beginning to gauge the rivers character and encountered the ‘Terror 1’ rapid. We knew we were close when the pace of the water dropped significantly and we entered a natural reservoir; the huge landslide that caused this rapid was backing the water up for over a mile.

Primrose not ‘Terror 1’
After we picked this rapid apart and successfully navigated it, Dan no longer felt the need for it to be called ‘Terror 1’ as it only induced mild terror, so insisted the maps were hastily re-annotated to read ‘Primrose falls’. Between here and the next Terror we had non-stop white-water action with everyone getting used to the style of big water paddling with loaded kayaks.

Entering another reservoir everybody individually noted the idyllic camp spot river left with a beach, wooded area and clean water supply. A paradise not for us, we wanted to box off the second Terror before the day was out. The Dragon had been here; half a hillside had been ripped from its roots and dumped into the river creating a monstrous rapid, so powerful we were convinced that any attempt would rip you from your kayak with a deadly swim through sharp landslide rock thereafter. An arduous portage ensued, ascending a scree slope, then a game of negotiating loose boulders balancing on each other like a scene from my favourite Japanese show; Takeshi’s castle.

Getting back to river level after four hard hours we were faced with a very challenging rapid, not one to be considering at the end of a big day when running on empty. We opted to camp. Sheltering from the rain, normal multiday routine ensued, flask of tea for everyone, followed by rice surprise for dinner (curry powder and yak jerky were the surprise tonight… and every night!) Sam’s upbeat stories and enthusiasm faded our body’s aches from continuous exercise at altitude and after re-fuelling we all skulked off to find a rock to hug for the night. Some were more successful than others with both Sam and Dan experiencing some ‘technical difficulties’ with their inflatable mattresses. Thankfully I was camped far enough away to be oblivious to Dan’s midnight curses.

It took a while to get moving the following morning; namely because of the big rapid downstream, dubbed ‘Happy Hour’. 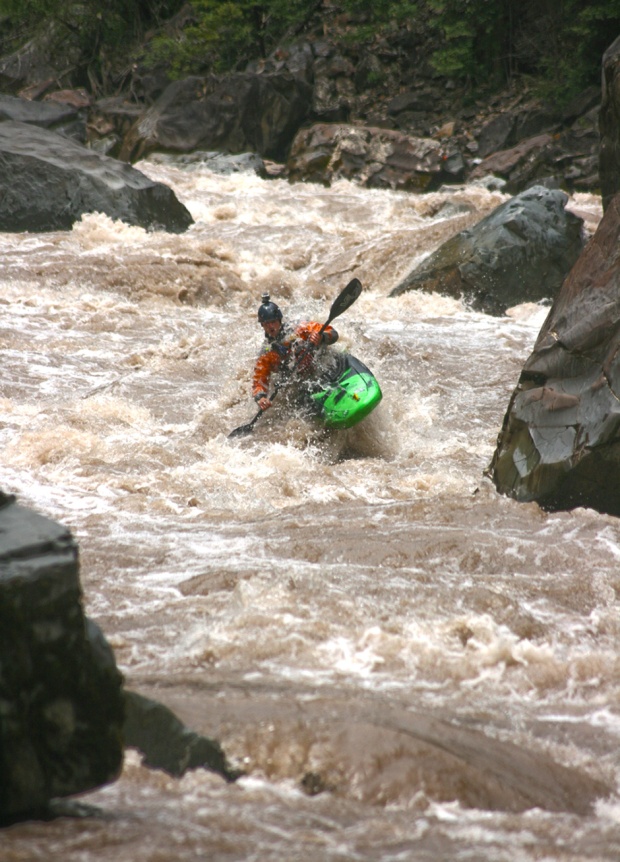 This was by far the most complex of rapids we had come across, with big moves to make, holes to dodge and precise points in the river that needed to be reached in order to ride this beast out in one piece. Carefully scouting from the bank we scrambled back to our kayaks, seal launching in we went all together, heads down and sprinting everyone came through with beaming grins. The punishment of sleeping on cold uncomfortable rock was instantly forgotten and we cranked out a few river miles with delight at every rapid.

Vulture nest camp
Sooner than expected we came across a significant rapid and in the rush to inspect it, I almost neglected the fact that I was standing on a pristine sandy beach, with a trickling, tumbling waterfall landing in a grassy meadow behind me. Luckily, this had not evaded Dan and he was currently lying on his back making sand angels on the beach. Since our first day covered so many miles, we opted to have an easy day and rest. After all, we were on holiday.

Like the lost boys we each explored this new habitat with great interest. Drying out kit from the previous night’s deluge, we keenly watched vultures circling overhead, nipping in and out of their cliff top residence. The sun became strong in the sky and after drinking more tea, Sam found amongst the driftwood, an old barrel lid, the perfect Frisbee! This was a keeper and we were kept entertained by this all afternoon and only had to stop to apply more suntan lotion and drink yet more water from our private waterfall.

The next day we started with the camp rapid, coined Frisbee, which set the tone for the day as we paddled mile after mile of continuous read and run white-water all the way to the confluence with the Qiemu Qu; a significant tributary of the Yellow and our next planned river.

Taking out at the confluence we hiked upstream to try and gauge the character of the river and inspect what we could. Whilst Sam attempted to tame both ‘Wild Horse’ and ‘Yak’ we felt happy that the gradient was similar to what we had estimated from our calculations, however, we were once again faced with a drainage that appeared to have unseasonable amounts of water in it. Was this a result of all the rain in the last 72 hours? Had it spiked and was dropping off? It certainly looked like it was but we had a couple of days to decide whether we would attempt this river so we pushed on into ‘Whirly Corridor’ where each of us disappeared into the murky unknown a number of times, much to everyone else’s amusement and heckling.

The landscape began to change from big canyons to wide open valleys and the river widened, with rapids easing also. For the next day and a half we churned out the miles, portaging a known dam and finally finishing at 18.00 on the final day.

From high on the plateau we now felt like we had paddled into a desert with an arid, dry landscape surrounding us. In awe of our surroundings and elated to have completed the first descent of this section of the Yellow sleep came easy to all, relieved that the year of the Dragon had bared only his teeth, putting challenges in our way but letting us pass unharmed. Let’s hope that the Qiemu Qu grants us such luck.