The Sayan Mountains in Siberia lie near the border with Mongolia, a short distance from Lake Baikal and Irkutsk. A little known region for paddling, with only a few groups a year venturing into this mountainous wilderness, it offers superb multi-day opportunities for the adventurous paddler.  We were to paddle two rivers on this trip; the Kitoy and Biluti. Both spectacular and worthy of the effort required getting there.

The headwaters of the Kitoy River can be found in the Kitoyskiye Goltsy mountain range. The drive from Irkutsk takes seven hours and takes you past the south western tip of Lake Baikal, before heading west along the border with Mongolia and finally north into the mountains and the start point of what was to be a spectacular 10-day self-supported trip.

I found out about the trip via a friend in January. Tomass Marnics from the Adidas Sickline Team was advertising it on his website and we quickly signed up. I hadn’t done a multi-day before, let alone such a long one in such a remote location. Many questions come to mind when planning for such a trip. Can I get away with a superlight sleeping bag or will I need something warmer? How many sets of thermals will suffice? How will we pack 10 days worth of food into our boats? What happens if we become ill or injured and are unable to paddle out? And probably the biggest question on our minds was just how hard the walk in to the Biluti was going to be. All of these thoughts added to the sense of adventure and ensured that we were all excited (and perhaps a little nervous) for what was to come. 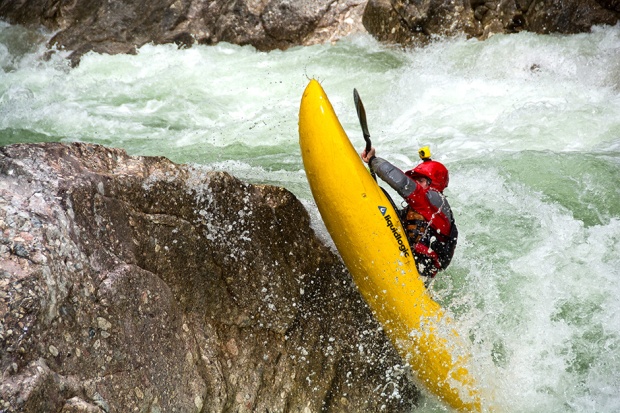 Arriving at Tomass’s lockup in Irkutsk at 7.30am we began the arduous task of loading our kayaks with all the kit we would need for the trip. Forgetting an essential bit of kit at this point would be a disaster. Thankfully, despite our jet-lagged states, this eventuality was forgone. The truck that Tomass had organised to transport our boats arrived, alongside the mini-van to take our international group of paddlers that had signed up for the trip to the put-in.

The put in was spectacular Turning off the main track, onto a smaller one we reached the river. The track ended abruptly and continued on the other side of the river, presumably used come mid-October when the river begins to freeze over for the long and bitterly cold Siberian winter. Whilst we marvelled in the beauty of this exceptionally remote put-in our minds were soon brought back to the fact that we were about to paddle into the middle of nowhere. No roads, no shops, no other people, no communications and no real shelter for the next ten days. Kitted up and boats loaded we peeled out of the first eddy, and embarked on this adventure.

That first day we paddled for just one hour until reaching the tree line and our first camp for the night. Initially the food was good with fresh and bulky items to use up. Our first meal was chicken with fresh salad. The following night we were treated to marinated steak by Seva (the Russian on the trip) who proclaimed “I don’t like expedition food. This is better!” However, as the trip progressed the quality of the food lessened somewhat. Buckwheat was a regular, as was horsemeat from a tin with pasta. Distinctions between breakfast and dinner meals became irrelevant – it was just what we had. This was a bit of a concern prior to departing having heard stories from those on previous trips exclaiming their dramatic weight loss! Thankfully, a plentiful secret stash of energy bars and some good fishing spots helped to supplement our calorie intake and provide a little variety.

The paddling over the first few days was relatively easy but in a beautiful setting. The Sayan Mountains, whilst not being the highest, are certainly dramatic. On the third and fourth day though things began to pick up with some powerful grade 4/4+. During the fourth full day on the water we entered Motkin Cheeks, the second canyon of the river, which contains the largest and most powerful white water. With a medium/high level following a little rainfall the rapids in here were quite intense. Portaging would often have been a more arduous affair than running them and so on the whole we had to just get on with it. Following Tomass instilled confidence, as with such a smooth paddling style everything was made to look effortless. Granted we didn’t always follow with such grace and a few sketchy moments were had by some members of the team.

‘Rapid 47’ is the largest and most committing rapid on this section. To get to a point at which you can view the rapid at river level you pass the point of no return. Instead we took out before the rapid, emptied our boats of kit and walked this for 30 minutes to a small clearing high above the river. From here we scouted the rapid, with everyone deciding that the river and commitment level was a little too high. Whilst scouting though we saw another boat float down the rapid some 100m below us. Three of us were rather fearful it was our own boat having the same distinctive yellow and orange colour scheme.

Nervously we returned to our boats upon which we came across a group of Russian kayakers also paddling. It turns out they had had two swimmers above the rapid and lost the boats! A huge sigh of relief for us, but rather unfortunate for them! Luckily though we managed to retrieve one of the boats, whilst they later recovered the other. We would later learn that those losing their boats at this point in the trip would have to endure a lonely four-day walk through the thick pine forest blanketing the mountain sides in this remote location to get to the nearest road.

The biggest unknown
The biggest challenge, and the biggest unknown for us, was the walk in to the Biluti River. This is a tributary of the Kitoy and has some incredible pool drop rapids to delight in. However to get there requires a six-mile walk over two days with loaded boats. This may not sound too bad, however the ‘trail’ required a significant dose of creativity to follow, all whilst moss covered tree roots, partially decayed fallen trees, and over hanging branches tried their best to ruin our day. The walk was hard. We suffered, a lot. However, looking back on it you forget the pain and remember the incredible white water that we were lucky enough to paddle.

The first day on the Biluti starts in earnest with a fun four-metre drop into a low gorge. More drops follow with some sticky holes to avoid in places. Halfway down the run is a rarely paddled gorge with some horrific looking drops hidden within. Naturally, we walked this but the route back to the river was far from obvious. In the end we lowered our boats into a side creek, climbed down to a slippery rock ledge, cautiously sat back in them, before sliding then falling six-metres back to the river! We ended that first day at the 12-metre waterfall that some members of the group were keen to run the following day. Tired and satisfied to be back on the water, safe in the knowledge that there was no more hiking to be done we retired to our campsite perched high above the gorge that was to be paddled the following day. 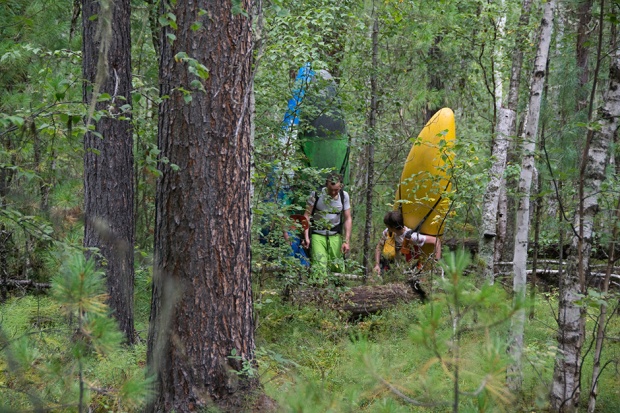 First American
Tony was the first to paddle the fall the following day, and in doing say also became the first American to have paddled it. Matt, Tomass and Fredy also paddled whilst the rest of us waited below with cameras aimed in anticipation. The next few drops were sublime; nice clean lines over steep but not overly serious drops. This culminated in a must run six-metre drop, and a tricky double drop that only Tomass and Iain ran.

The remaining paddling on the Biluti was continuous class 3-4 in a spectacular deep canyon. We soon reached the confluence with the Kitoy and paddled down to some huts where we were to stay for one night. Never before has a roof over my head and a bed been so welcome! The ‘sauna hut’ was also very welcome having not really been washed for eight days. A ‘sauna-river-wash-sauna’ dash was repeated a few times. It’s true that you never really appreciate the little things until you go without them for a while. Feeling clean is certainly one of those things!

With most of the significant white water now complete, the end of the trip and getting back to civilisation was beginning to play on many of our minds. In the way was a 90km paddle out that would take nine hours. We completed this over two days, the first of which was a 70km slog. Tomass’s instructions for the day were to, “keep paddling for about seven hours and then you will see the campsite on the right.” Each setting off when we were ready and paddling at our own pace, I found myself on my own for the duration. With no watch to keep of time, it was a case of just maintaining a rhythm and letting your mind wander is in order to pass the time and forget the numbness creeping into my legs.

We set off shortly after sunrise on the final morning in order to get to the take out at the village of Razdolye by 10am. Looking back upstream, the mountains in which we had spent the previous days had vanished. The landscape, now flat and expansive brought a sense of completion to the trip. Having started above the tree line at 1,840m near the source of the river, we had descended 1,300m over our 330km journey that weaved through the wilderness of the Sayan Mountains, a majestic and truly unspoilt place. Feeling tired yet exhilarated it had been a privilege to be here with an amazing group of people from around the world. Celebratory beers and snacks were purchased from the village shop before heading back to Irkutsk to begin our journeys home.

Having started above the tree line at 1,840m near the source of the river, we had descended 1,300m over our 330km journey that weaved through the wilderness of the Sayan Mountains, a majestic and truly
unspoilt place.