By Werner Ostermann of NovaShores Adventures

The Bay of Fundy with its largest tides on this planet can conjure up images of raging currents, whirlpools and riptides. While all this does occur on this amazing body of water, it also presents some opportunities for exceptional sea kayaking adventures. The most extraordinary destination on the Fundy is the Cape Chignecto area, where the towering cliffs of the Avalon highlands meet those huge tides. Due to differential erosion along the most geologically diverse coastline in Nova Scotia, where it is said that when the super continent of Pangaea split part of it drifted on to what is now Morocco and the other became the Chignecto shore where sea stacks, caves and arches are the norm.

Spicers Cove
We will be going on a three-day coastal adventure Paddling the entire coast of the Cape Chignecto wilderness park. It is a protected area which is inhabited by large land mammals such as Black bear, moose, deer, and numerous smaller species, plus a wide array of land and sea birds and some of our favourites that we share our paddle with – grey and harbour seals. On arrival at Spicers Cove, the wild beach we launch from, our group of four and guide spend some time first checking out the numerous carboniferous age fossils to be found along the red sand beach. It takes a while to stuff every available inch of the kayaks with the necessary safety/camping gear and some good food and wine to enjoy after each day’s paddle.

After an easy launch from the sand beach we make our way towards the high conglomerate cliffs, keeping a safe distance in case of rock falls until we reach a fault line where it abruptly turns into the more solid volcanic rhyolite and basalt predominant along this part of the shore, allowing us to paddle within a paddles length of the sheer cliff face. This mix of red and black stone presents a colourful backdrop to the jade green water of the phytoplankton rich waters of the bay.

On reaching Squally point we round the corner with the highest raised beach in the province high above us, a remnant of the last ice age. We paddle into a stunning scene of sea stacks and a jagged coast where the red rhyolite is frequently broken by the black diabase dykes that surged through the crevices millions of year ago, now eroding into a kayaker’s fantasyland.

Some of these stacks are part of the legends of the indigenous peoples of the area, the Mikmaq, natives whose imagination gave life to many of the mysterious forms that thrust to the sky from the sea. Like Olympus in Greek mythology, the Bay of Fundy was the home to the Mikmaq gods. But the Mikmaq were long ago driven from this area by Europeans who realized the value of the impressive timber for building ships. As we leave the sea stacks we paddle into a place known as Eatonville Harbour.

wild river, at one time it roared with the steam engines driving the saws to cut the wood to build the ships, which they then filled with more of the wood for export to Europe and the eastern seaboard of North America. Little evidence remains of this time, although we do find some old rusted iron nails and a horseshoe on the constantly eroding beach. In the short time we are there the large tidal basin empties and the mouth of the Eatonville River does a Jekyll and Hyde turn from placid to a surging white water river.

After lunch we continue down the shore, which has now changed to predominantly basalt, with the occasional bald eagle soaring overhead and black guillemot’s flying in a flurry of quickly beating wings from their cliff side nests, their red legs and feet giving a flash of colour over the water. On arrival at Seal Cove we set up camp on the sand/cobble beach and enjoy a gourmet dinner as the sound of the beach pebbles washing to and fro as the surf advances up the beach gives a soothing backdrop of sound to our secluded beach camp. The reds and oranges of a spectacular sunset paint a picture of serenity as we retire after a beautiful, peaceful day. 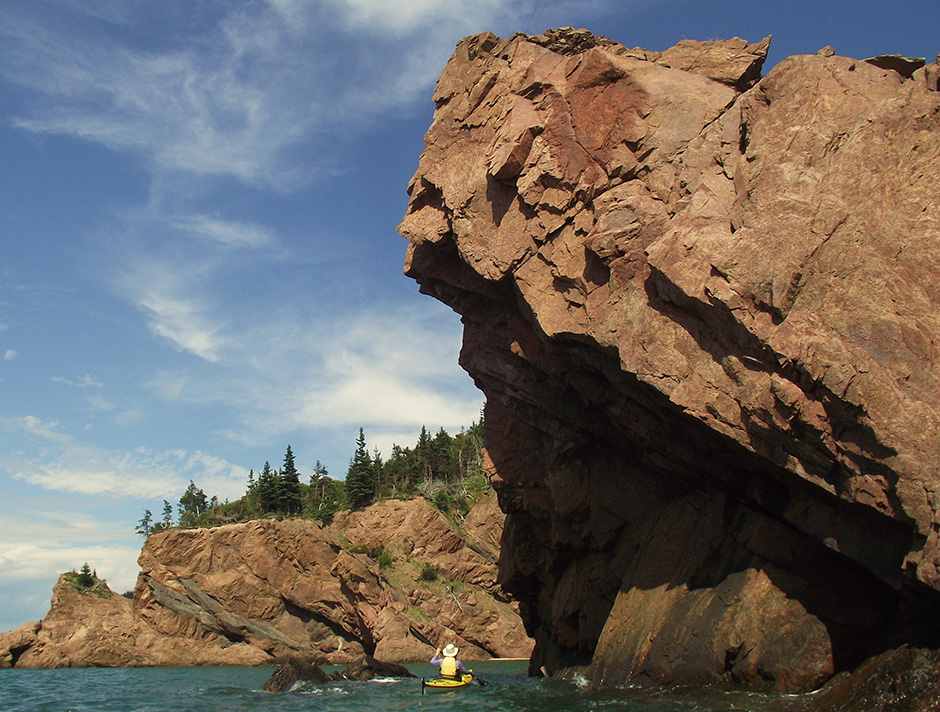 We awaken the next morning to strange melody of sounds, the bellowing of grey seals from the next cove, mixed with the mewing of the gulls overhead. After a hearty breakfast, we begin the day with a discussion of the challenges of the day’s paddle. The wind has picked up and some surf on the steep beach means we will spend a bit of time until the tide drops further. And it does drop! With a tidal difference of up to around 12 metres on this part of the bay the environment is constantly changing. 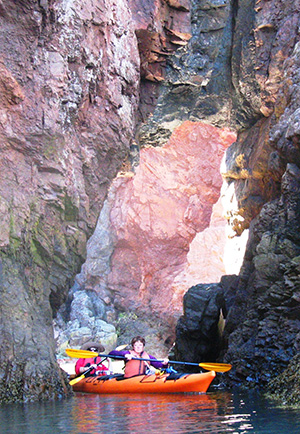 With a bit of wind and the currents caused by those big tides, today will have to be well timed for the rounding of Cape Chignecto, which is thrust deep into the Bay of Fundy, splitting it into two large bays. We will time the rounding with the high tide, where we can hug the cliffs. Before we reach that though, we spend some time with the grey seals. They have hauled themselves up on the bladder wrack covered rocks as the tide drops and eye us warily as we quietly float into their world.

The younger seals slide into the water before we approach and survey us close up from where they feel the most comfortable. The big bulls eye us suspiciously though, remaining on the rocks unless we get a bit too close and then they too will slide down into the sea for a closer look at these strange creatures. Knowing we can easily make the cape for the high, we spend some time with the seals, letting them get comfortable with us and taking photos. On reaching the cape we take advantage of the small beach, which is getting smaller by the minute, to have a lunch and watch the tidal rips surging out into the bay.

At the top of the flood tide we are ready to go, quickly slipping around the point into a new world. While the jagged shore to this point has been fascinating, what meets us on rounding the cape is formidable. We are met with huge sea cliffs rising vertically 200 metres from the water. The aptly named Devils Slide really gives us a sense just how diminutive we actually are! As we continue down the imposing coastline Old Sal, a large sea stack that marks the entrance to Refugee Cove, our camp for the night, greets us.

Refugee Cove
Refugee has a storied past, named for the Acadian escapees of the British deportation of 1755. Apparently a group of the Acadians, who had refused to declare allegiance to the British crown, escaped to this remote cove, setting up a lookout for British ships at the French look off just above the cove. Just offshore is Isle Haute, named by Samuel Champlain in 1605 and in the distance is Cape d’Or, again named by Champlain, mistaking the copper coloured cliffs for gold instead of the copper it was.

On setting up camp we decide to hike the coastal trail out of Refugee for a look at our environment from a different perspective. It isn’t long before we realize that a sea kayak is by far the best way to explore this rugged coast. Climbing at a 40-degree angle up 200 metres, we are sweating profusely by the time we reach the top. The kayaks are mere specks on the beach.

The following day is an easy paddle, giving us ample time to really investigate the sea caves along the coast – and a real treat – take a freshwater shower under a waterfall that tumbles a hundred metres down a cliff into the bay. At high tide we can paddle directly under it, but today we luxuriate in refreshing water that massages away the stiffness from a couple of days of paddling and then dry in the warmth of the summer’s sun. Return to civilization will come all too soon.

Visit www.novashores.com about kayak tours on the Bay of Fundy